Phoebe has the power of premonition, a passive power. She triggers this power when she touches or is in presence of something that has to do with what her premonition is about. As her power grew, her premonitions become more vivid to where they become slightly colored and she can hear and feel what is going on and to hold her premonition longer.

Her premonitions are triggered by objects or strong psychic auras, making them a form of psychometry. This originally only encompassed precognition, to see the future, but grew to include retro cognition, to see the past, too. Phoebe also developed the power to trigger a vision in somebody else with similar powers, "sharing" visions with Elders and knowing how to trigger a specific "trap" premonition in Mitzy, who had stolen her powers.

Later on Phoebe obtained her first active power of levitation, to defy gravity and float in the air (but not fly). This power was uncontrollable when she first obtained it but she later gained complete control over it. She cannot usually move horizontally, and at one time, Prue has to use her telekinesis to move Phoebe over to another side of a cave while she was levitating. Phoebe usually mixed her martial arts and kick boxing with her levitating power to knock out her enemies. In Season 4, she was able to glide short distances with this power. In Season 5, she was able to propel herself through a ventilation duct with this power. 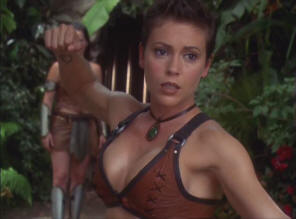 Being an empath allows her to channel the emotions of those around her. This initially caused considerable problems, as she would encounter other's emotions and act on their whims and wishes. The success of her advice column may be due to her empathic abilities. She may have already had the ability to feel other's emotions, thus allowing her to understand others and give good advice to those in need of it. Her ability to understand others may have simply advanced to the complete empathy seen throughout season 6. Since powers are tied to emotions and Phoebe can feel other's emotions, she could sometimes tap into their powers.