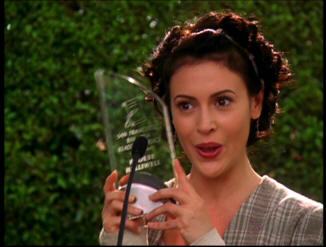 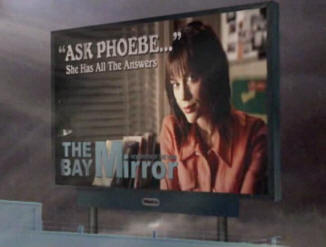 In 2002, the Charmed Ones helped an Innocent named Karen Young. She had an advice column in The Bay Mirror, a newspaper in San Francsico, and Karen couldn't get along with her boss, Elise Rothman. Karen was infected with a Demonic Power, which was causing her to get confused and later on, violent. While Piper and Paige were helping Karen, Phoebe wrote a column in Karen's place so that Karen wouldn't get any more trouble with her boss. After Karen was freed from the Demonic Power, she quit her job. Karen wanted to spend more time at home with her kids, and told Elise that Phoebe wrote the column, saying "it was non-judgmental and it had a freshness and a passion it hasn't had for a very long time". After Karen quit, Phoebe was hired as the Bay Mirror's new advice columnist ("The Fifth Halliwheel").

Later on in 2002, Phoebe's column became more and more popular and hugely successful. The Bay Mirror placed billboards all over San Francisco to promote Ask Phoebe with the slogan "Ask Phoebe - She has all the answers". Piper once jokingly said the billboards "could be seen from a passing 747"("A Witch's Tail, Part 1") . When Jason Dean bought the paper in 2003, he wanted to do more with Phoebe's column. He was planning to syndicate her column in the country and at first, Phoebe agreed, but later, she refused because she wanted to spend more time with her family and didn't want to be "one of those annoying cellphone people" ("Sense and Sense Ability").

In 2004, Phoebe became an Empath. It helped her giving extremely accurate advice, as she was now able to read people really well. The huge success of her column caused her to become somewhat of a celebrity with the San Francisco general public. In an interview with Chad Carson for KQSF Radio Station, Chad said that her column had skyrocketed and that all the critics rave about how amazingly insightful Phoebe's advice was ("Valhalley of the Dolls, Part 1"). Later on, she guest-hosted a talk show named Chit Chat This and That for a week ("My Three Witches"). When Phoebe lost all of her active powers, she was afraid that she couldn't give that insightful advice anymore, and Leo needed to remind her that she was an advice columnist long before she became an Empath ("A Wrong Day's Journey Into Right").

After everything she went through the previous year, with the betrayal of Gideon, Phoebe felt a little disconnected and she realized that she was recycling past advice to current readers. Even though Paige and Elise told her that every columnist does it, Phoebe felt like she was letting down her readers. She decided to take some time off, until she felt better to return to work. Elise advised her to take a sabbatical and hired Leslie St. Claire as the ghost-writer ("A Call to Arms"). During her sabbatical, Phoebe won a Reader's Choice Awards for a column that Leslie wrote ("Cheaper by the Coven"). At the end of Once in a Blue Moon, Phoebe goes back to work as Leslie leaves San Francisco.

In 2005, the sisters faked their own deaths. The Bay Mirror was mourning when Dex advised Julie Bennett (Phoebe's alias) to take over Phoebe's job, as he thought the advice giving talent would run in the family after he had talked with Julie ("Malice in Wonderland"). After the sisters assumed their own identities again, Phoebe continued with her job as advice columnist ("Kill Billie Vol. 1")

When the paper was having troubles, Elise organised an event on which couples could get married by Phoebe, who helped them find love through her column. One of the couples was Romeo and Juliet, who were cursed into a Time Loop by William Shakespeare. They hoped being married by a Charmed One would break the curse. Juliet inspired Phoebe to write a book. While at the publicity stunt, Phoebe regained her Empathy and was able to feel Romeo and Juliet's love ("Innocents Lost"). She later planned on having a live video web chat, but she used it to bust Cal Greene ("Morality Bites Back").

Phoebe was inspired by Juliet to write a book about how to find love, called Finding Love. As seen in Forever Charmed, the book is a huge success and best selling. In Morality Bites Back, Phoebe is writing a chapter about trust. In The Old Witcheroo, Phoebe said that the publisher of her book pushed back the release, because due to the magic switch, nobody would buy a book on Finding Love now they just could cast a love spell.

During her career as an advice columnist, her boss, Elise, was very lenient with her, giving her a lot more leniency than she did with anyone else as long as her column was in in time. For example, the previous columnist Karen Young nearly got fired for just being "sick", but Elise let Phoebe's many different excuses go, even working things around so they'd fit for Phoebe at times. Throughout the years, there grew a friendship between them. Elise said at Phoebe's (fake) funeral that she saw Phoebe as a friend ("Still Charmed and Kicking").

In Scry Hard, Elise proved that she completely trusted Phoebe. Elise took a day off and left Phoebe in charge, saying that Phoebe owes her for all the times Elise has covered for her. Phoebe quickly learned just how hard that job is and is nearly overwhelmed by it, but eventually manages to get everything under control. Phoebe later found out that Elise took a day off to have a date with another man from the paper.